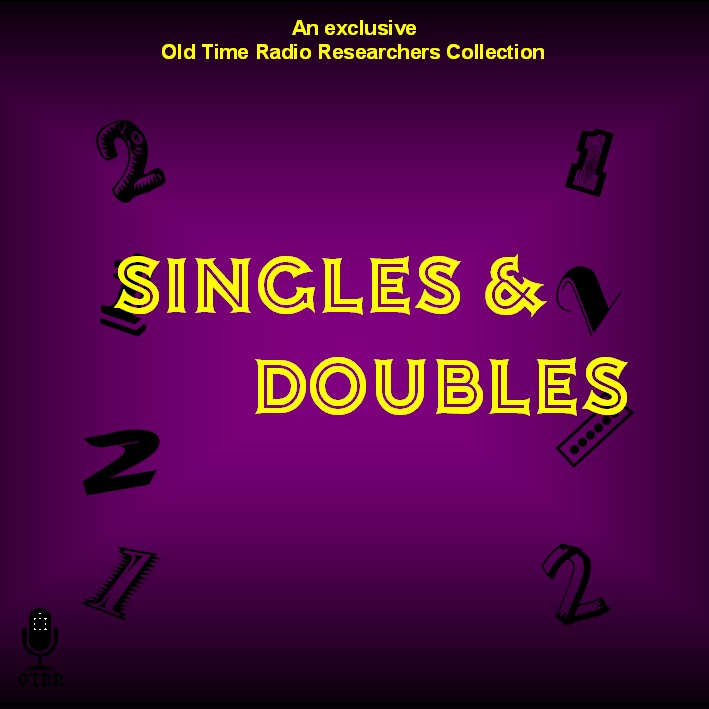 This is one of these pages. Click on one of the above for a different OTRR Singles and Doubles Collection - Single Episodes page.

This is a work in progress. This OTRR Collection is a Non-Certified one, containing series in which currently only one or two episodes are known to exist -- hence the name: "Singles and Doubles Collection". Almost every type genre is included.

Radio -- called by some The Theater of the Mind -- has been with us since 1920 when stations WWJ of Detroit and KDKA of Pittsburg made the first regular commercial broadcasts. The first program aimed at entertaining the unseen audience followed close behind.

Over the years since then, literally thousands of series have been broadcast nationally and thousands more in regional or local markets. Some endured for a few years, others for 20 or 30, and some unfortunately only had one episode broadcast. Of those thousands, some series saw some of their episodes saved for the future, some saw nearly all and others only one or two episodes.

While the goal of the Old Time Radio Researchers Group is to preserve radios past by collecting, and archiving as many different series as possible and making them available to the community, we do not want to let the series that only had a minimum number of episodes to survive go unpreserved for future generations.

To that end we have put together this unique collection of series. Most of the programs you will find here will be totally unfamilar to you, but they are informative and entertaining none the less.

This is the second version of this collection that we have released. Since the first collection new broadcasts have surfaced, and others will undoubtely be found in the future. When and if that occurs, we will release a version three.

From comedy to drama to cooking shows to music, you'll hear it all here, and every episode will be unique and different. They run the gamut, from the middle 20s to the early 70s, all showing us a glimpse of the past, when things were slower and families gathered round the radio each evening. Times when each person was hearing the same thing, but created a different picture in their minds of what the characters looked like, the scenery, location, and most important the sounds. Sounds that each found a different meaning in, but one that entertained, educated, and made the world a smaller place, where you could hear those stories that in the past were told to just a few, gathered round the dinner table, at a campfire, or in small audiences, but now the whole world could hear and enjoy.

Some of these episodes may be misnamed or misdated. If you find such, please let us know. Additionally there may be some dead air space at the beginning or ending of some episodes. This is not one of our certified sets, it is being provided as a way to obtain those series in which only one or two shows have survived. From the Old Time Radio Researchers Group. See "Notes" Section below for more information on the OTRR.

5 episode of Adventures of Zorro available at http://www.archive.org/details/AdventuresOfZorro
Reviewer: robertsradio - favoritefavoritefavoritefavorite - July 29, 2011
Subject: A good collection
Your Humphrey Borgart Audition program is actually
a Bob Trendler program which was broadcast from the studios of WGN radio sometime around the late 1940's. Bob recently passed away this past July 2011 at the age of 99
Reviewer: Dodsworth the Cat - - December 21, 2008
Subject: Wizard of Odds Isn't
This is a Leave it to Joan show from Jan. 20, 1950. A fine cast. Joe Kearns plays the father, Shirley Mitchell as Penny, Willard Waterman as Mr. Hackaday and guest star Al Jolson tossing out some pretty funny ad-libs.
The show was originally a CBS summer replacement series that debuted on Monday, July 11, 1949. The line-up introduced that night began with "Young Love," a comedy starring Janet Waldo and Jimmy Lydon revealing the tribulations of a secretly married couple attending a college which forbids student marriages. "Leave It To Joan" aired next. It was followed by "Breakfast With Burrows", written, produced and directed by comedian Abe Burrows. In previous programs, Burrows confined the cast to one person, himself. His new show found him surrounded with all sorts of characters. CBS' new Monday summer line-up concluded with "Straw Hat Concerts," featuring light concert and operetta music.
Reviewer: Razzilla - - September 9, 2008
Subject: errors found
These two in The Adventures of Zorro

are not singles or doubles... At least 4 shows can be found online...

Also Take It Or Leave it is from 42-11-08 Football teams... There's at least five available from this series available...

FYI: If a file has an MP3 title tag, that automatically appears on the page instead of the file name.

A nice little feature of the Internet Archive, but that means that the file name and the MP3 tags embeddd within the file both should be correct!
Reviewer: XMinusOne - favoritefavoritefavoritefavorite - May 18, 2008
Subject: A large collection of forgotten and/or short-lived shows
As usual, with a collection this large there will be a few mis-named shows, something that's entirely able to be lived with. When you start to download (i.e., save as), you'll get the correct name or topic. While several people will comment or complain that there are errors that should be corrected and made right, you know what? I simply appreciate the opportunity to listen to shows that might otherwise not be available. Thanks for the effort, and thanks for a collection that deserves four stars simply for being available for all of us.